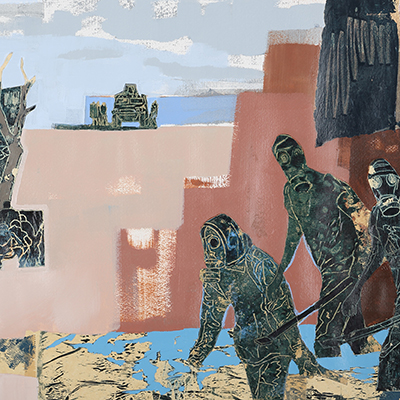 Nelson and German based painter Lisa Chandler explores protest movements and the things that divide and define us.

This is Catherine Day’s first exhibition in the South Island after shifting to Fairlie from Wairarapa in 2014. These works indicate an urge to locate herself in a new environment, with their reference to ridges, grids and contours - a kind of mapping.  She imagines what lies beneath the surface as well as reflecting on what she sees in her new surroundings.

Catherine exhibited the first works in this series in the South Canterbury Art Society Annual Awards Exhibition in 2016 and in 2017 one of her paintings won First Prize in the Watercolour section of the same awards show.  She has also had the opportunity to exhibit a selection of these works at 77 Art + Living, Fairlie.

Catherine brings to her art practice an extensive background as a musician (piano is her instrument), and music teacher as well as some years working as a studio potter.  She graduated with a Masters Degree in Fine Arts (Massey University, Wellington, 2009) where she majored in sculpture - creating installations using found objects, sound and moving image. Her first solo exhibition was held at Aratoi, Wairarapa Museum of Art and History in 2011.